In todays Elefterotipia in the inset “Library” it is dedicated to Demosthenes Davvetas poet, artist and professor at Institut d’ Etudes Superieured des Artes in Paris and expert advisor to the prime minister Antonis Samaras in the aspetcs of culture. It refers in his multifarious personality, which likens him as “homo universiles”. In the inset it is outlined his work as an author, giving soecial weight in his latest poetic collection “In Orfeas mirror” and it is also refered to his critic of study “Marina Abramovitch. The artist is here”. In his interview he highlights the difference between the French rational and to the personal logic, which with the feeling structures the Greek identity. He is living between the two countriew: Frence and Greece and Demosthenes Davvetas has the opportunity to think in an original way for the crisis in Greece, exceeding denunciatory references and proposing the blue as the color of the new Greek reality. As a citizen of the world he is able to talk and meet with other famous arists of the dispresion taking for example Louka Samara and John Kouneli. As an expert advisor to the prime minister he aims with his suggestions to modulation of one outward- looking cultural policy, aiming to show the modern Greek culture 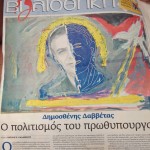 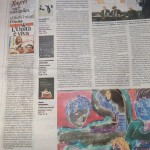 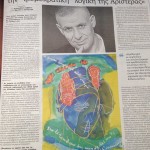 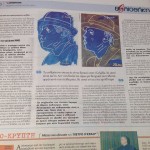