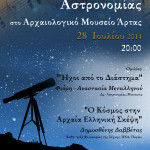 A night of Astronomy in the Archaeological Museum of Arta, Greece.

The Ephorate of Prehistoric and Classical Antiquities of Preveza-Arta invites you to an Evening of Astronomy Monday, July 28, 2014 at 20:00 on site Archaeological Museum of Arta. Astronomy and Philosophy discuss about the universe. Telescopes will be available to the public to observe the night sky.
The evening will begin with brief presentations on topics:
“Sounds of Space”: Fiori – Anastasia Metallinou, astrophysicist, IAADET, National Observatory of Athens.
“Cosmos in Ancient Greek Thought”: Demosthenes Davvetas, professor of Philosophy of Art, IESA, Paris.
Following observation with telescopes in the courtyard of the museum under the guidance of Physicist Dimitris Tzouvas and a group of amateur astronomers from Arta. The Moon, Saturn and Mars are some of the celestial objects that we can observe.
The access to the event is free.

Published at Eleutheros Typos 24/7/2014Capitalism and “Left” artThe meaning of innovation, as it had formed since the Age of Enlightenment, Rousseau or Ferguson, is related with the human intelligence and the creative tend to perfection. It is also related with the freedom of expression and the movement of citizens but also with the right of citizens to criticize everything. As Schumpeter declares in his theory of “creative destruction”, the nature of innovation deconstructs traditions, based on continuous progress and aims to the rationalization of interest, namely the better organization of production and research.
The philosophy of fruitful refusal, which is based on the pillars of development and consumption, embodied perfectly by capitalism and by liberal democracy. The latter is the only political system that allows even the most extreme revolutionaries or reactionaries to act in its bowels. Marx foresaw the failure of capitalism and failed, seeing instead the communist models collapsing. The secret is that capitalism through the useful innovation is continuously updated. Capitalism knows how to use and embodies any contrary voice.
Take, for example, the modern and contemporary art. From its birth to the early twentieth century modern (modernist) art has two aspects: on one aspect is the deconstructive, subversive in relation to the past, revolutionary, in a permanent rupture with traditions. On the other, modern art wants to be innovative, refreshing, imaginative, creative, invoking to the future. And the artist in his turn is on one side radical, non-conformist and on the other side he is charmed and benefited by industrialists, bankers or financial speculators, who spend incredible amounts of money to buy modern artworks.
The capitalist bourgeois recognizes in himself the attitude of modern art, with the showcase of the “left” subversive. The current global art market justifies the powerful businessman, because it confirms his theory about: innovation, permanent sustainable mobility, global capitalism. The modern artist talks and dreams his anarchy and at the same time wishes to become a billionaire, as happened with many other “left” artists. The smart capitalism knows about it and uses it for his benefit.
So I would say that contemporary modern art (and there is no doubt about the high quality of Baselitz’s, Kieffer’s, Cragg’s, Twombly’s, Bacon’s etc projects) becomes, as “high culture,” the cultural crutch of capitalist system. This allows artists continuing the left phraseology, leaving them with their highly revolutionary rhetoric and at the same time, uses them as an embodiment of their dynamic philosophy of constant innovation, fertile reversal, and creative destruction. As capitalism knows well how to use his weapons, so capitalism would transform his opponents to a showcase of power. To talk in totally realistic terms.