THE COMPETION OF AMNISIAC IDENTITY.
The subject of freedom, a very precious and desired, for humanity, became an issue of contradiction among the right and left wing idealisms.
The right wing places its emphasis from within the its philosophical structure that is named liberalism. It’s a spherical perception of life, which touches the aesthetic, ideology, economy, morality and in general whatever issue concerns the human liberation.
Primary target of liberalism is the development of personality, and self knowledge of the human being, through competition and constant invention. Thus the human is able to acquire the conscience of a creative freedom, which composes tradition and ingenuity in everyday life and way of thinking.
The left wing commences from the philosophy of “distrust” against traditions, and anything in regard to national issues and given points of cultural reference. Believing as well in innovation and breakthroughs, the left in the name of revolution denies values that are considered conservative and identifies progress and evolution with the breaking of the conservative and traditional past.
The meaning of freedom for the left is this constant confrontation with the conservative past. Both the left and the liberal element are derivatives of modern thought, the modernism.I could argue that among other issues two philosophical backgrounds.
First one is Nitse’s “hammer” philosophy, breaking traditions. Far from the philosopher’s indent they adopted his theory, both the barbaric right extremists and the social populistic left extremists.
Second one is Hegel’s dialectic for the state –also far from the philosopher’s indent – that the Marxist communism and fascism are based upon.
As long the capitalist right remained within the boundaries of constant innovative supply (for survival reasons), the anti-conservative left, proclaimed a post modern nihilistic interpretation of Nitse, coming in contrast of the Western civilization’s basic values.
By deducing from Western civilization the cultural references (classic Hellenistic education, Enlightment, Bible) the reference points are diminished and freedom from creation becomes egotism in anarchy, individualism in anarchy, and cynical relevance of all moral values.
Western society is a composition of ideas from Russo, Kant’s morals and the Stoics, under the ever watching spirit of its creators, Plato and Aristotle.
If you put everything in relevance claiming all is point of view and that there are not standard values, then you easily provide grounds in the barbarous nationalism or the fanatic theocracy with the known crimes or even to the fascist communal where every society competes with perseverance of their “truth” to the other societies, in the most vulgar way.
After the totalitarianism during WWII, today we we are subject in another of totalitarianism, the one of forced differential and forced relevance.
In the name of difference, the multiplism and variety, all of which were promoted as countermeasure for nationalistic extremism, the indifference of neutrality and the amnesiac identity were born.
These age merciless and destroy people’s identity menories.
The multiculturalism and the relevance of values suggested by the modern left wing it exacerbates rather than solves the identity issues.
Exacerbation is weakness. Modern society as depicted by Russo is based on Society’s Contract. That includes all citizens, maintaining their differentiality but at the same time including them in society’s general identity. Thus everybody and everything are treated with the isometric analogy and space required based on the law, civil rights and obligations.
However we should not confuse the equal (analog) spacing, with the relevance of everything that leads to denial of everything in the name of so called progress.
Freedom does mean constant relevance but a creative bridge of delivering and innovating values of the past with the foster leadership of present and future.
Freedom is not nihilism, where the modern leftist are threaten to drive society

Last night (30.09.2014)  a dinner was held at Azzedine Alaia’s house, organized by Apple to onor the famous Australian designer Marc Newson, who designed the new Apple “ iwatch”.
The dinner honored with their presence personalities such as Mick Jagger, the famous architect Jean Nouvel, Luz Casal ( Pedro Almodóvar’s muse) and Jack Lang eith his spouce. I had the honor to be seated next to Jean Nouvel. 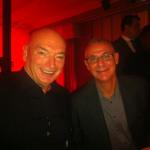 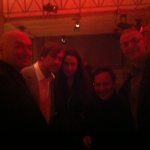 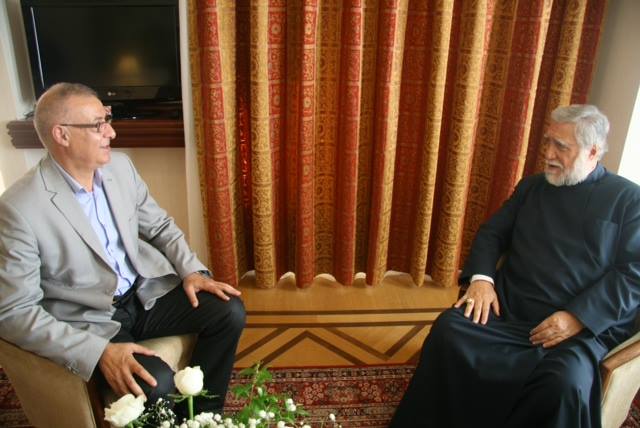 The meeting of Prof. Dimostheni Davveta with the Patriarch of Armenians, Aram I, at Electra Palace Hotel in Athens, with key topic of discussion the persecution and genocide of Christians in the East countries, as well as the barbaric behavior against them. They both agreed that fanaticism of the Jihadist should be addressed not only with military means, but also with ideological and cultural struggle that have as their base the timeless cultural values

Youth and Entrepreneurship
The numbers are unabated: one in two young people in Greece are unemployed. them Many of those with university degree. What is the future for them? People – even the more- who and are not absorbed right or left are looking for an occupation unrelated to their studies, abroad. More than the 50% of unemployed are looking for job opportunities, in countries of Europe or America or further to Australia, to New Zealand etc.. This is a real scientific potential bleeding of the country. The best minds leave the country. How does stop this, which deprives our country of innovative and talented personalities? For decades and especially after 1981 the mentality that prevailed from the family and from our political action was to find a job opportunity in a public sector in order to have financial stability. The public sector so slowly – slowly replace the possibility of inspiration and creativity of youth. Thus the civic sector services slowly and steadily substituted the youth’s ability to create and inspire. The public sector diminished the ability of research and innovation, the dynamics of progress, through eloquent over protectionism of itself and pushed otherwise young minds into premature aging in mentality and creativity. The recent economic and social crisis that we are still living pointed at the issues and proven the problems many times over. Hence the return to Public Sector mentality will not help in avoiding the migration of valuable young scientific or skilled personnel. As a result any high tone from the Opposition party(ies) that support the return to Public Sector mentality carries vast responsibility since in the name of vote hunting and election winning it employs the danger of populism. Reduction of public sector on the other hand drives towards entrepreneurship. This must be first and foremost in the qualitative parameters of getting the country out of the crisis. Reducing public free support the government must invest in upgrading public sector skills. Providing funds for the acquisition of new skills. Creating skilled personnel. Providing jobs for these skilled in the market. The purpose of skilled training has to be a one way street for structural changes in the country. By placing emphasis on the industries of manufacturing, tourism, institutional functions of cultural and international relations as well as manual labor trades, we can bypass the ‘culture‘ of the university degree (our country’s cultural plague) to the ‘culture‘ of specialized labor. Mentality change is needed. This must be grow from the family, school and educational environments. First role and support must be given to businesses with special loans targeted to internship education. Entrepreneurship must contribute to change of mentality. Businesses and businessmen cannot be blamed as the opposition party of SYRIZA claims. It’s not logical to put everybody in the same position in a generalized application of Marxist theory and be blamed constantly as people oppressors. This is populism at its worst. We cannot bring up our children with these ideas. Already at school level we should include special courses with information on businesses creative actions, gear them towards entrepreneurship. Only thus innovation and research will be assisted. In return businesses must provide special budget for innovative actions. It would be helpful for students and school to visit businesses and distinguished businessman. School education can do that. Through cultural change and relevant educational reforms emphasis can be placed in the idea of of “contract project” in other words a labour contract that will be terminated with the end of each project undertaken. Thus the way to credits and development is paved. It allows mobility and flexibility of actions. As a result the youth instead of leaving the country will stay and prosper.